But what is “critical thinking”? A critical thinker, in essence, is someone who has an interest and ability to engage in argumentation. But this does not mean “argument” in the sense of a personal dispute (“Yes it is! No it isn’t!) It means someone who thinks actively and analytically, and who investigates information carefully. He or she does not accept things without analysing information and checking if it is true or not. Critical thinkers look carefully at relationships between ideas and they consider whether the relationships are genuine, reasonable, and appropriate. They don’t take assumptions for granted and weigh claims carefully for evidence.

Critical thinking involves active questioning of the information you have. Instead of taking information for granted, you need to think about it and evaluate it before forming an opinion of your own. At university you are expected to be a critical thinker when:

Your lecturer will be looking for this skill in your work – your capacity to carefully consider information and offer your own opinion based on reasoning. Simply reproducing material you hear or read thoughtlessly does not demonstrate critical thinking.

How to think critically

Thinking critically means having the capacity to exercise judgment. This includes weighing up evidence and identifying the most valid viewpoints or the most reasonable cause/s of action.

To do this, you need to be able to:

Sometimes, mapping or brainstorming what you know about a topic can help you to ‘see’ a view more clearly, as removed from your own biases. Read about mind-mapping.

An argument, as it applies in the university, is a series of connected statements which are intended to lead to a conclusion. Importantly, when we present the conclusion of an argument, we don’t just state it, we also have to give reasons for stating it. There are thus three components of an argument:

(2) the conclusion (or contention);

(3) the inference (or link) from the premises to the conclusion.

It is easy to see what is being concluded here. The conclusion is: Iron will expand when heated.

The assumptions that lead to this conclusion are as follows:

The inference being made is from the reasons to the conclusion. You can write this argument out like this to show the progress of the argument from reasons to conclusion:

P1 and P2 above stand for “premise” 1 and 2—a premise is a statement/assumption in an argument which helps in arriving at a conclusion (they are called the major and minor premise in this example). “C”, of course, stands for conclusion. Written like this, an argument is known as a syllogism.

By contrast the following is not an argument:

This is just a statement or an assertion for which no reasons are given.

The relationship between the parts is made clear using an argument map: 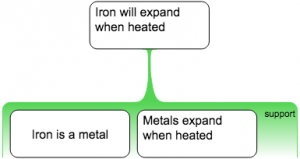 What evidence can be presented to back up the reasons given in the argument above? Well, I could cite evidence from the periodic table to back up Iron is a metal (although that’s so well-known now I would probably not need to) and I could cite an academic paper to back up the claim about metals expanding when heated.

This is a very simple example of course. Academic arguments are much more complicated! But the principle of establishing reasons, contentions, and  inferences is the same. Looking for evidence for reasons is also the same, regardless of the argument being expressed.

For more information on how to make argument map, see the helpsheet on Argument Maps.

When you conduct research, ask these questions to help you evaluate what you read:

Beyond reading, you also need to apply critical thinking to your own writing. This involves assessing your own arguments and ensuring that your conclusions are supported by evidence. So, not only should you be questioning what others have argued, but you should also question your own arguments, and present them as well as you can. You will be assessed on how well you do this.

At university, you are expected to move away from descriptive writing to argumentative writing where you advance a contention based on reasons for which you have evidence.

There is still a place for being descriptive in some contexts, e.g., in reflective writing. Descriptive writing tends to:

Descriptive language also tends to be neutral and objective, i.e. the author’s ‘voice’ is removed from the content. There is no sense that you are advancing a point of view about an issue.

Critical thinking, on the other hand, requires interpretation, justification, analysis, argument, explanations, reflections and advancing hypotheses. Writing critically requires you to have a clear voice in your writing, one that is synthesising, interpreting, judging and drawing conclusions from reasonable premises.

When writing an argumentative essay it is expected that you advance a point of view on an issue that you wish to defend.

Moving from descriptive to argumentative critical writing means asking yourself questions, such as the critical questions listed above (see ‘Reading critically’).

It also means writing differently. In particular, in means using critical thinking phrases such as:

To illustrate, here are examples showing the difference between descriptive and critical writing (University of Sydney, n.d.):

Australia has a political system based on the principles of federalism where sovereignty is divided between the national (federal) government and state, territory and local governments. While the powers of the states were well established through the Constitution at the time of federation in 1901, these powers have diminished as states have had to be more and more reliant on the federal government for funds as its sphere of influence has expanded (Singleton et al., 2000).

Notice that the voice used is neutral. It makes no comment or judgement on the facts stated. The writer is telling the reader what they know about the topic.

The debate about the relative merits of federalism and its suitability as a political system for Australia has engaged political theorists and politicians since federation. For example, Galligan (1996, p.35) puts forward the view that Australian federalism is essentially democratic, suggesting that devolution of power to the states ensures government ‘close to the people’, avoiding centralisation of power. However, this position does not take account of arguments by those such as Patience (1997) who suggests that more representation at different levels of government does not mean better democracy. It would seem that what is at stake here is how democracy is understood in the Australian context and how the history of the federal compact is interpreted.

Note here the appearance of the writer’s voice. The writer has synthesised the positions in the literature and has made comments on these differing positions. This leads to a critical judgement or interpretation of the issue. The underlined words and phrases demonstrate the type of language that indicates a critical voice is being used in the writing.

There is, of course, a place for both descriptive and argumentative writing. However, at university it is important to do more of the latter than the former.

Download our helpsheet, Reading and Writing Critically, for more.

What is critical thinking?