Literature reviews are not easy to write. They are complex and there are many things to consider. But if you approach them methodically, they will become easier with practice.

Why do a literature review?

Surveying and evaluating the literature that has already been written on a subject provides context for your own research. It enables you to clarify and sharpen your own research focus and methodology. Evaluating each publication by reviewing it can also clarify what has been established with a degree of certainty, and what is considered acceptable research work in a given field of study.

Literature reviews are essential in higher degree by research work (i.e., PhDs and Masters thesis writing). But occasionally you will have to ‘review the literature’ when writing an undergraduate essay. While the expectations and level of sophistication differs in these cases, the process is the same.

A primary source about the Aztecs would be a first-hand report of an encounter with them, or any work by an Aztec. Primary sources are always considered the strongest means of evidence. In the university context, a primary source is also a seminal paper by an author that outlines for the first time a key concept, theory or methodology that is later used by other researchers. It’s the first time something important is published.

At university, while any source of literature can be used, the works that have greatest currency and respectability are peer-reviewed journal articles (sometimes called ‘scholarly’ articles or papers).

How many references are needed?

There is no guide for how many sources you might need to consult when doing a literature review. It depends on your level of study and the topic itself. A “hot” topic in an area of cancer research for a PhD student might require keeping abreast of hundreds of research publications a week. A “cold” topic such as St Anselm’s third version of the ontological argument for God’s existence, might have a very limited range of research publications worldwide, and no recent publications. For a “luke-warm” topic there is likely to be dozens of useful recent research papers that you need to read.

The following is a general guide only and you should always check with your lecturer first.

What are you aiming for?

If you are writing a thesis or dissertation, the aim of writing a literature review is to understand the context of your own research by surveying and evaluating what has already been written on the topic. Surveying the literature can enable you to clarify your own focus and methodology. Evaluating each publication can also clarify what are considered valid and important areas in your field of study.

Crucially, a literature review helps to establish the research gaps in a particular area and, in so doing, outlines areas that require further research and investigation. When reviewing literature, you refer to what others have written or done on a topic and compare and contrast the work of others. Your aim is to find a gap: i.e., what others have done and what needs to be done in your particular area of study. The literature review puts this gap into focus. Filling the gap is what you then go on and do in your research. For more on finding the Gap, see here.

Narrowing the focus of the literature review is vital. It is not easy to find a gap in a research area such as: Computer crime. The area is too vast. However, if you were reviewing literature on Embezzlement via the use of targeted malware attacks on global supply chains of conglomerates in the footwear and clothing industry, you might have more luck. This is because your narrow area will have a limited range of research papers to investigate, and there are more likely to be discernible gaps. In general, being narrowly focussed is a good thing for research projects and literature reviews.

The structure of a literature review is very similar to an essay with an Introduction, Body and Conclusion. However, there is more detail in terms of one’s analysis of the literature compared to a standard essay. There is also important links between what is set up in the Introduction and what is delivered in the Body. Note that for an undergraduate literature review not everything listed here is expected.

There are several distinct steps here. The Introduction:

Optionally the Introduction can also:

The Body is where the detailed reviewing of literature occurs.  There are several considerations:

Download our helpsheet on the topic, Literature Review: Structure.

Typically, the Conclusion of a literature review should:

To start with, you need to do research — a lot of it. You have to cover the  topic you have chosen extensively, and be succinct and yet comprehensive (a difficult balancing act). Find any and all pertinent literature on the topic. Start with tertiary literature to find a broad topic and then drill down to secondary and primary literature.

While you need to read widely it doesn’t mean that you have to use every document ever written in your area (that is not possible anyway). But you need to make sure that you give an accurate portrayal of the literature in the field in the area you have chosen to investigate. This will take some time. The quantity you’ll be required to read, and the sophistication of the literature review expected, will depend on your year level and the degree program you are undertaking.

Organise the literature you’ve found, either chronologically or based on similar views or approaches. Create a writing taxonomy (see below). This could serve as a basic plan for the overall literature review. At the end of that, you should know what each paragraph will be about and what order they will go in.

A literature review must be written in complete sentences. Provide in-text and reference list citations for all the articles you’ve used just as you would in an essay.

Designing an outline that gives shape to your literature review can help in the process of writing one. Attempts have been made to develop writing taxonomies (Rochecouste, 2005). A good way to think of this is as a series of nested categories with ‘vertical’ and ‘horizontal’ axes. An example of an outline on the topic of Euthanasia is provided below. 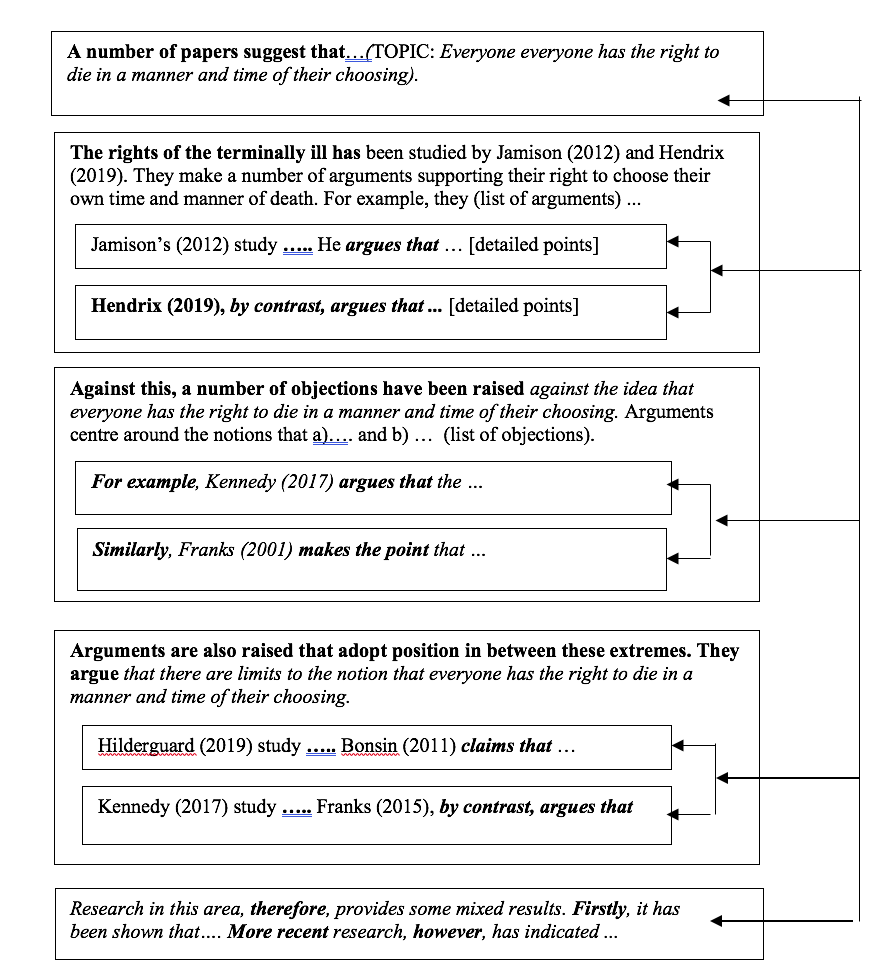 The first box represents the Introduction that sets the scene. The last box sums up the debates. The Body content is in the boxes in-between. Of course, this is simple for the purposes of elucidation.

Of course, this kind of outline can be expanded infinitely, as needed depending on the complexity of the review.

Download our helpsheet on the topic, Literature Review: Planning.

There are a number of ways to group literature and report on it when writing a literature review. It’s essential to do this. Writing without structure just leads to a big mess of ideas.

Group literature in different ways. (Notice the difference in tense in the examples below):

Use different ways of reporting on data, so that your literature review does  not sound monotonous:

Make use of a variety of different reporting phrases:

Below are some excerpts of literature reviews of varying quality, and an analysis of each.

Smith (1990) conducted an experiment on fear and self-esteem with 150 undergraduates. In the study he tested subject self-esteem and then exposed subjects one at a time to a fear-inducing situation. He found that those with lower self-esteem felt greater fear. Jones and Jones (1982) surveyed elderly residents. The respondents who had the greatest independence, self-esteem and physical health, had the lowest degree of fear of being a victim of crime…DeSallo’s study (1984) of 45 college males found that those who had the greatest self-esteem felt the least degree of fear. Yu (1988) found the same for college females…

People with greater self-esteem appear to be less fearful. Laboratory studies with college students (DeSallo, 1984; Smith, 1990; Yu, 1988) find a strong negative relationship between self-esteem and fear. The same relationship was found in a survey of elderly people (Jones & Jones, 1982). Only one study contradicted this finding (Johnson, 1985). The contradictory finding may be due to the population used…

The apparent differences between agricultural marketing and business marketing theories may not present a problem because both disciplines examine issues which are likely to require different theories and techniques for analysis. However, concern must be expressed at the failure of researchers to comprehensively examine the marketing strategies undertaken by individual farm businesses. Businesses in the agricultural sector include farmers and other often larger and more sophisticated agribusinesses, such as input suppliers and merchants. Business literature contains published articles examining the marketing strategies of large agribusiness companies; however, little research appears to reach down to the farm business level. (McLeay & Zwart, 1993)